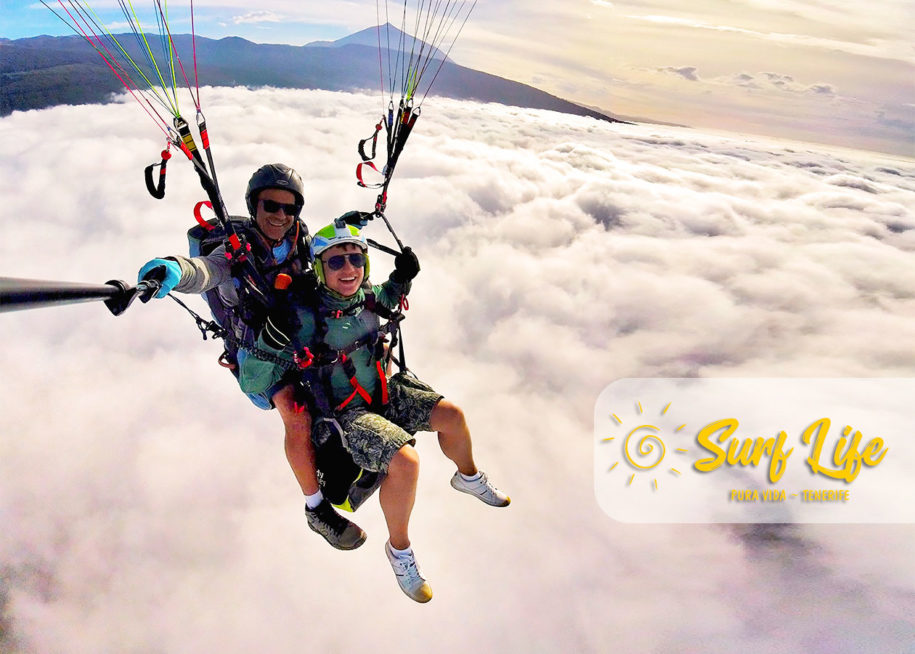 You are on a mountain peak, a blue horizon before your eyes. It’s a different world, inhabited only by those who have wings. You look down and you clearly see that the ground stops at some point. And suddenly your wings unfurl behind you, lifted by your instructor. And then you hear: “It’s time to run!”.

Paragliding is one of the most adventurous and exciting sports, and for sure one which makes you experience freedom at the utmost.

Paragliding in Tenerife is a very popular activity, and this is made possible thanks to the conditions and the morphology of the island which enable to practice it all year long and also at different heights, letting you enjoy different views from different wonderful spots.

If you choose paragliding in Tenerife South and more precisely paragliding in Tenerife, Adeje, there are mainly two types of flights available: at the height of 800 meters or 1.000 meters, from the small town of Taucho. The flight can last from 20 to 40 minutes and the landing usually takes place at the pretty beach of La Caleta, Adeje. You could think this is a small amount of time, but it is really not. Actually, it is quite fresh up there – in the sky of Tenerife – and after takeoff you’ll feel such a strong adrenaline that will accompany you throughout the whole trip. In the end it will feel like you’ve been flying for so much longer!

However, if you’re willing to experience something really special, Surf Life Tenerife and Lorenzo with his team at Flyinguide have got a real gem in store for you. You can fly directly from Teide Volcano, from a height of 2.300 meters! Now, that’s something for the most daring for sure. This flight lasts up to an hour and the landing is at Puerto de la Cruz or Candelaria (North Tenerife).

The paragliding school Tenerife will ensure maximum safety during your flight. And, of course, you will never be alone! Lorenzo and his team are experienced and talented pilots – they will always be behind you, making sure you will make the most of your experience. 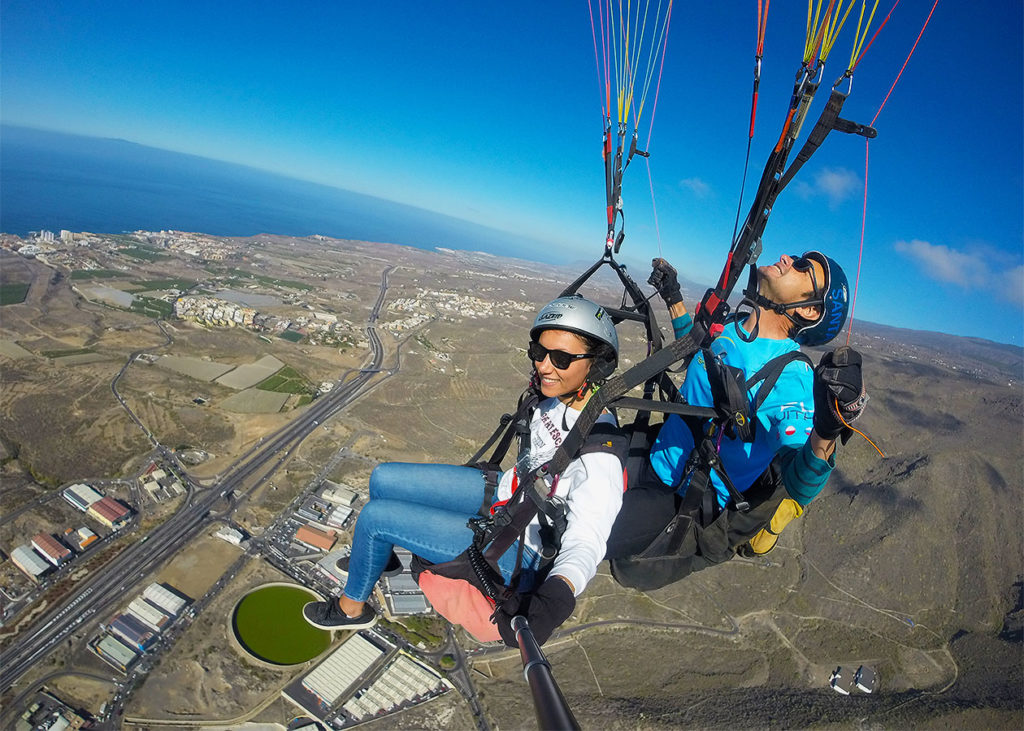 In this picture you can see Surf Life Tenerife’s founder’s sister enjoying her 800-meter flight experience. Maria Luisa wanted to tell us about her story, and if you want to have a glimpse into what it’s like to experience paragliding in South Tenerife, here it is.

It was January 2018, my first time in Tenerife, getting to know my brother’s new world. The Surf Life Tenerife school has got so much to offer and I wanted to experience as much as I could. My brother encouraged me to try paragliding, and even though I was a bit scared at the beginning, I decided to do it.

It was a wonderful sunny day. The instructors and I agreed on a central pick-up point in Adeje (usually the pick-up is directly from your accommodation) and then we left. I was quite nervous along the drive, which was adventurous itself. The way to reach the 800-meter height was indeed quite steep and there were a lot of rocks on the ground. The van was moving so fast it felt like dancing! After a good 20-minute drive, to my surprise we had to stop. We had to proceed on foot. And so we started walking among the rocks. The view was already beautiful from there. The air was fresh and I was starting to realize what I would end up doing in a few minutes. 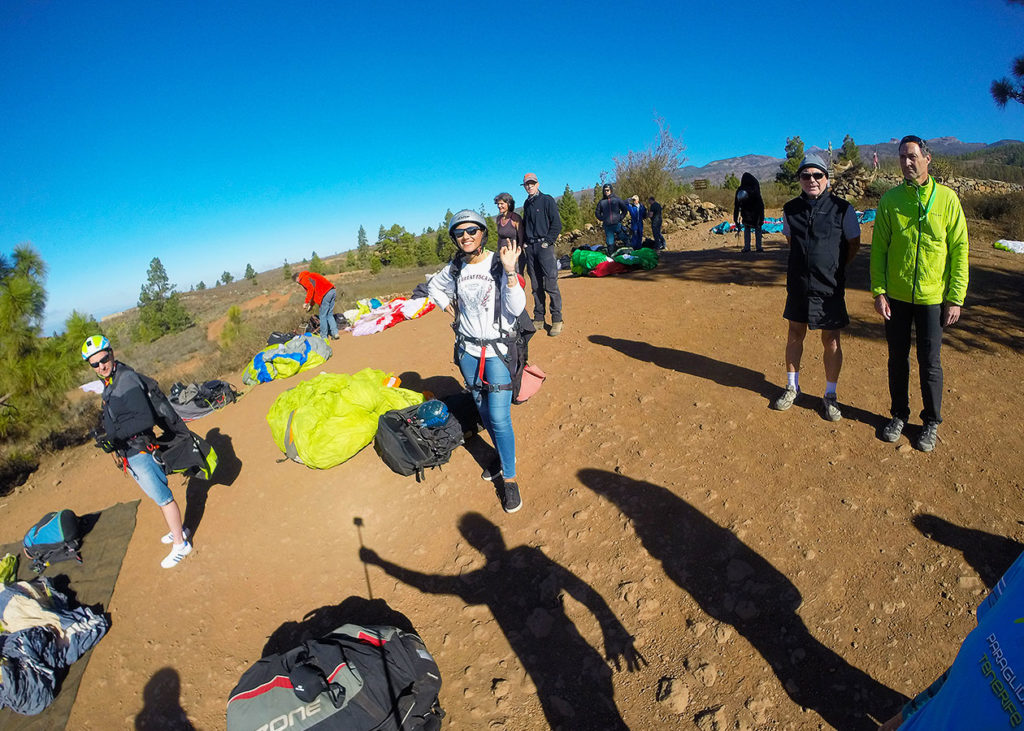 At last we reached the peak of the mountain, the takeoff area. There were a lot of people there. Some were getting ready for the flight, others just being supportive. There was nothing but us. There were just us, the trees and the blue sky of Tenerife. The so-called “pipi room” was just a few meters down the peak, among trees and bushes.

My instructor was already filming and taking pictures with the gopro. Of course such an experience needs to be captured. This pic was taken something like 5 minutes before takeoff – you can see I’m smiling but I’m actually trying to hide I’m so nervous!! Imagine when I discovered that it would have to be me to hold the gopro while flying. I was so scared I could drop it (fortunately I didn’t)!!!

The instructor helped me putting on the harness and gave me gloves to cover my hands. The air was quite cold and, of course, it would be even more while flying. That’s when I started to think that I should probably have worn something warmer than my sweater (as you can see, the instructor was actually wearing a thermal shirt whereas I was wearing a bikini under my sweater haha)!

While getting ready for the flight, he explained a very clear and simple rule: “At a certain point, when l tell you you have to start running, run as fast as you can, and don’t stop even after we leave the ground – keep running in the air.” Those instructions sounded so strange to me, I was not sure I would be able to give a very good performance – but it was essential to do so so that we would not lose height.

At last I started seeing people taking off. One, two, three… It’s my turn now.

And there you go.

You are on a mountain peak, a blue horizon before your eyes. It’s a different world, inhabited only by those who have wings. You look down and you clearly see that the ground stops at some point. And suddenly your wings unfurl behind you, lifted by your instructor. And then you hear: “It’s time to run!”

I started to run as fast as I could, and my instructor with me, literally taking a leap of faith. Suddenly I felt there was nothing else under my feet. I felt a strong breeze pulling towards me, as well as a crazy adrenaline rush. I was up in the blue and windy sky of Tenerife, finally being able to fully enjoy the panorama. 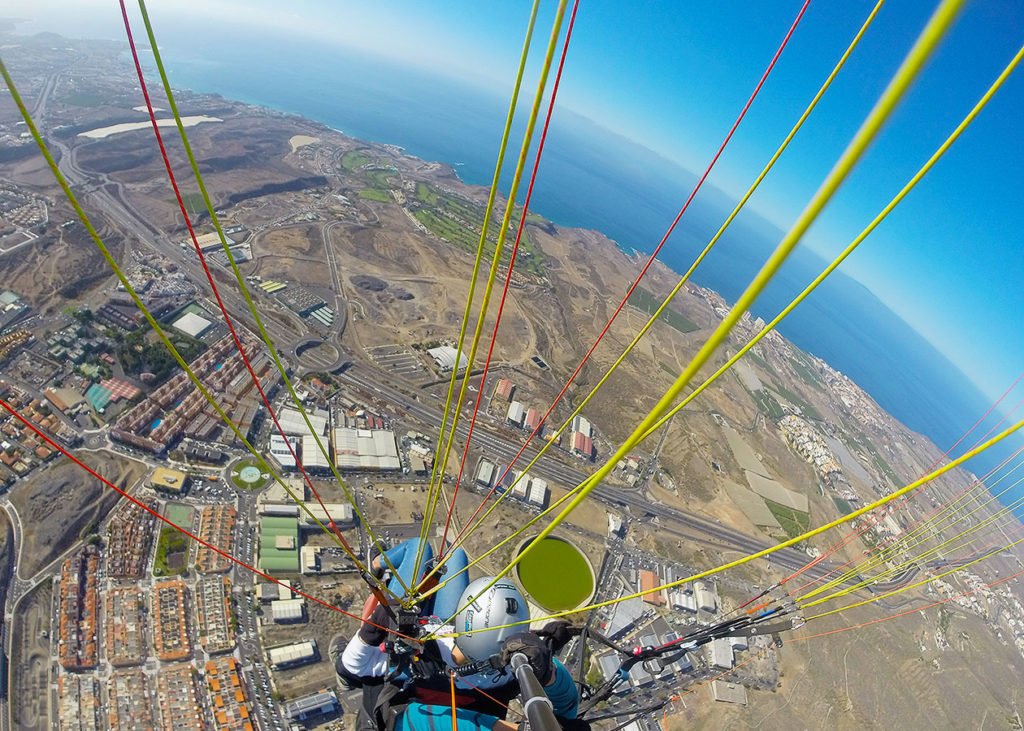 The view was really incredible. I could see the clouds, a burning sun, a deep blue ocean, a round horizon, all from another perspective. It felt like a dream. And my instructor was kind enough to also show me how to take over the controls during the flight, which was absolutely crazy!!! I had such a good time!

We finally landed in La Caleta, where we had the chance to relax after the adventure. I had something to drink at the local bar and sat on the sand, waiting for the sunset. The perfect end of a perfect day.

So this is what it feels like to go on your paragliding holidays in Tenerife. I haven’t tried it elsewhere but I bet Tenerife is one of the best places to do it. Have you tried it?

If not – and if not in Tenerife – what are you waiting for?

“Open the wings of freedom and make your dream of flying in the air come true”.