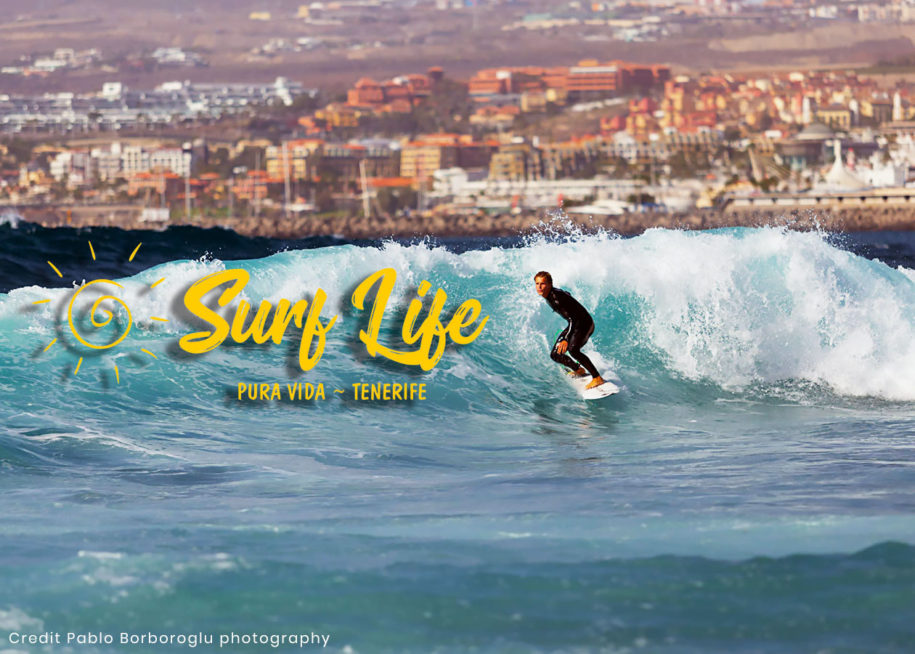 Do you remember where we started from in the last article about surfing waves? I guess you are still in the office, right? In front of the laptop, checking the surfing forecasts. Exactly where I left you last time. So, here we go again! But this time, we go straight to the point! Which are the best conditions to surf and how do we recognise them? In this article I’ll explain you how to read the surfing forecasts and how to apply this in our beautiful Tenerife!

So, we said that the wind blowing on the water surface creates an amount of energy that starts traveling towards the direction in which the wind blows. The longer the fetch and the more powerful the wind blows, the bigger the waves will be once the swell – waves propagation in the ocean – will go through shallow water.

We also said that the main factor that contributes to the generation of waves is the shape of the sea bottom: depending on its slope we will have different kinds of surfing waves. But can we predict any other factors which can also influence the wave conditions?

There’s many indicators in a surfing forecast app, and all of them are extremely important to consider. We can analyze together 2 of the most common websites used to get both weather and surfing forecasts in Tenerife, the ones that the team from Surf Life Tenerife uses to organize the surf lessons: magicseaweed.com and windguru.cz. 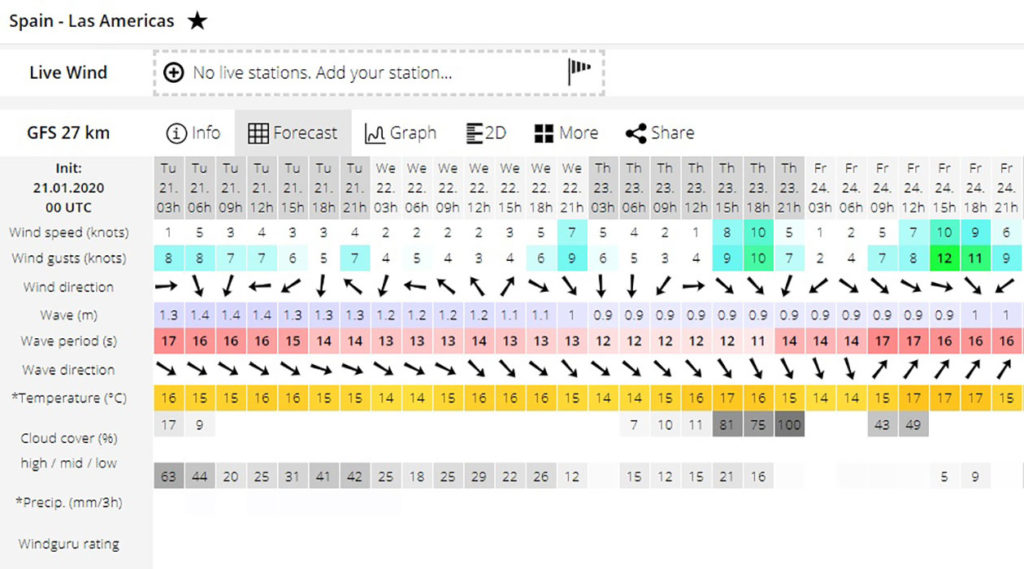 The rest of the indicators (temperature, cloud cover, ..) are the classic parameters we can find in a weather forecasts website for Tenerife.

So, how do we read the surfing forecast website windguru?

First of all, we need to take into consideration the swell direction and power. It needs to be clear that if the swell hits the shore directly, the wave generated will be bigger. For example, considering the surf spots in Tenerife, a swell coming from the west, will hit directly the shore of Playa de Las Américas where we find La derecha del conquistador / El medio. On the other hand, a swell coming from the south will hit directly the spot called Fitenia, where Surf Life Tenerife’s surf lessons usually take place. We can distinguish 2 kinds of surfing seasons in Tenerife:

As a surf school operating in La Fitenia, Surf Life Tenerife assures surf lessons all the year, considering that western winter swells also bring waves to our spot, even if less directly than on the western side. 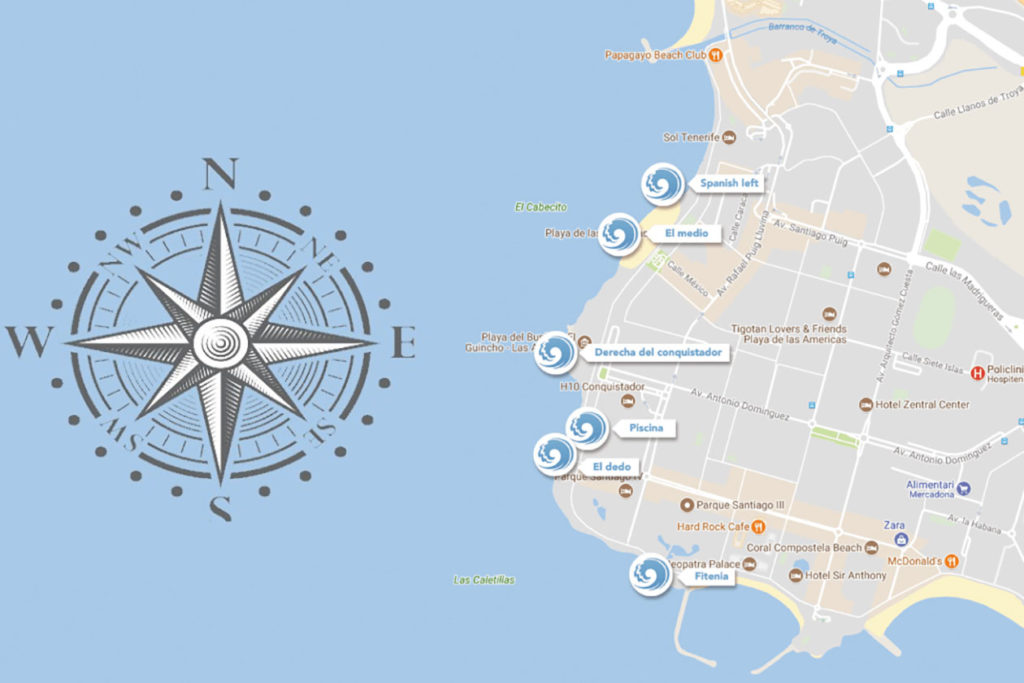 A map of the surf spots in Tenerife, in Playa de Las Américas, with a compass rose can help to interpret which wave and wind direction are favourable to surf and in which spots.

Actually, the crucial point for the generation of a wave is bathymetry – intended as the shape of the sea bottom. So, considering the wave direction, the wave height – which is around 1.4 meters and between 16-17 seconds of period – last Tuesday 21st February we could expect chest/shoulder height waves coming and breaking directly in the western side of Las Américas. But those considerations need to find application in the bathymetry of the surf spots on that side. The forecasts didn’t foresee any wind conditions which were meant to affect the wave conditions that day. We always need to remember that the wind is very likely to increase in the afternoon, though. But is this all the information we need?

Let’s now have a look at the surfing forecast website called magicseaweed specifically for the first day of the previous range, last Tuesday 21st January. The surf forecasts are referring to the surf spot in Tenerife called La Derecha del Conquistador in Playa de Las Américas, a few minutes walking from our Surf School. 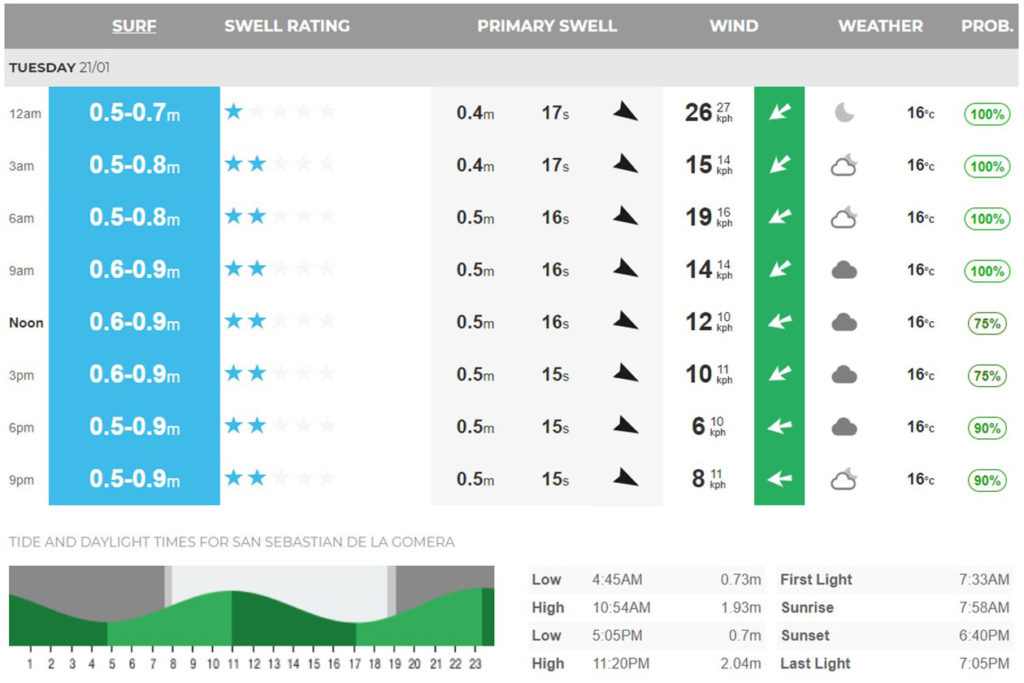 The first aspect we can see is that Magicseaweed calculates what could be the wave height depending on the models the website uses to read the forecasts. Even though we can still consider this website a reliable source for the surfing forecasts in Tenerife, from the team of Surf Life we personally don’t recommend considering certain these kinds of data. The exact height of a wave is a factor which is influenced in the end by the shape of the sea bottom and the directions of the wind. As we can see, the other parameters are basically the same taken into consideration from the surfing forecast app called windguru. But magicseaweed adds here the analysis of a really important factor: the tide.

How do tide levels influence the wave generation?

Tides are the rise and fall of sea levels caused by the combined effects of the gravitational forces exerted by the Moon and the Sun, and the rotation of the Earth. The tide finds different applications in the sea level depending on the geo location. There are places in the world where there might be up to a 7-meter of difference of water level between high tide and low tide, and other ones where the difference can be around 30-40 cm, something absolutely  imperceptible.

In the Canary Islands the tide level can have a maximum variation of around 2 meters – this happens during the days of full moon, when the gravitational force is at its maximum – and a minimum of 60/70 cm – which happens during the half moon lunar phase.

Every day there are 2 high tide peaks and 2 low tide peaks that alternate each other in a time shift of around 6 hours and 15 minutes. Here is a little scheme outlining how tides evolve:

This scheme helps us understand that the tide peaks shift everyday of around 1 hour.

But why is the tide level so important to consider? The next picture will help you have an idea of what we’re talking about. 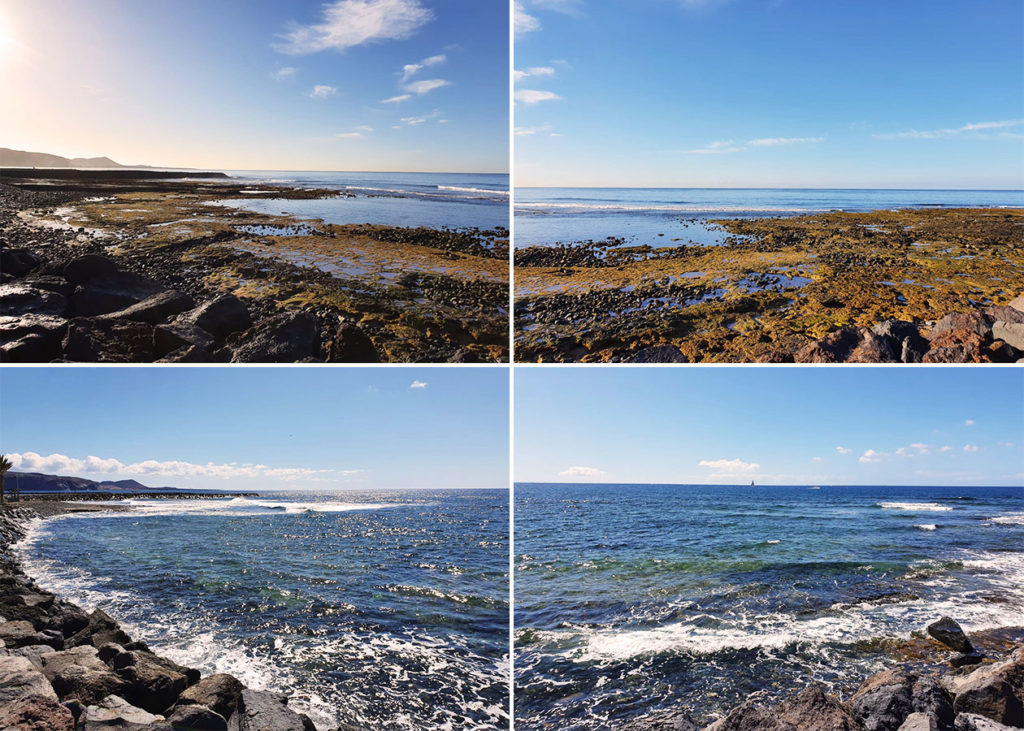 Low tide and high tide on a day of full moon in La Fitenia, the spot in Playa de Las Américas where Surf Life Tenerife gives its surf lessons.

The last collage shows 4 pictures taken in a day with maximum water shift between the tide peaks. In this case the high tide peak was around 2.40 mt and the low tide around 0.20 mt. The lagoon where we give surf lessons was completely empty in the morning and completely full 6 hours later. In most cases, none of those conditions are good to surf, as in the first case the waves would break directly onto the rocks, causing the risk of getting hurt, above all for beginner surfers who still can’t fully control the board. The high tide condition, on the other hand, fills up the lagoon with too much water, preventing the formation of the waves, unless the swell hitting the coast is really powerful.

Now, it is clear that in order to find good conditions to go surfing in our spot we need to calculate the time of the surf lesson in the 2 or 3 hours in the middle of the tide peaks, where the water level is not too high but not too low. Now, for what we’ve said it is clearly not sufficient to just consider the tide time. For safety reasons, what we will need to consider by looking at the tide chart is the water level. Above all, in a rocky surf spot in Tenerife it is fundamental to know with which water level some rocks that might cause danger will be covered with water, creating a risk of collision.

How to properly read a surfing forecast website depending on the spot where we want to surf in Tenerife?

We are getting to the end of this article, how can we resume all this information?

Furthermore, these times, we have another instrument that can be really useful to complement the surfing forecast websites and apps: Webcams. The most helpful webcam in Tenerife for the surf spots in Playa de Las Américas, is the one right on top Parque Santiago IV, exactly in front of our surf spot La Fitenia live.parquesantiago.com

Another good webcam in Tenerife is the one of the surf spot called El Cabezo, in El Médano cabezo.bergfex.at/webcam/cabezo3

The latter offers a good look on all the bay and it also indicates the power of the wind blowing.

Now, we invite all surfers, seniors and new, to think about when, many years ago, all these instruments like surfing forecast apps and webcams did not exist! Well, life certainly is now easier, but taking this information simply as it is would be superficial!! Just a lot of experience and lots of time spent watching and comparing your favourite surf spots depending on the surfing forecasts can help you foresee when there will be good conditions to surf. And one day you’ll maybe find yourself one day surfing perfect waves completely alone until the other surfers on the beach see with their eyes what you could tell the day before, both thanks to the apps and your experience 😉

You can find a good resume of the last 2 articles in this short video about the types of surf breaks and how other factors like the wind affect the wave generation.

If you would like to have any other informations about surfing forecast in Tenerife, don’t hesitate on getting in contact with us!